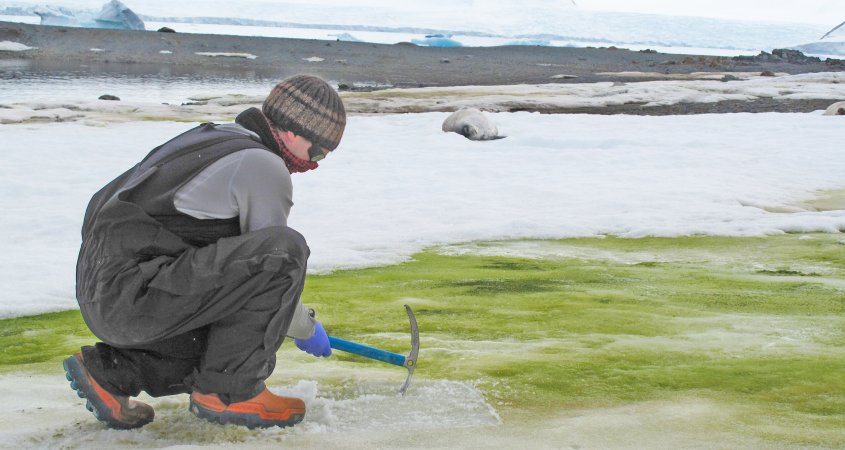 In coastal Antarctica, some snow isn’t the typical white. Green snow, created by blooms of algae, are giving the continent an increasingly green tinge. Warming temperatures due to climate change are helping the formation and spread of this green snow, which is more prevalent along the coast.

Using data collected over two years by the European Space Agency’s Sentinel 2 satellite, together with on-the-ground observations, a research team from the University of Cambridge and the British Antarctic Survey have created the first map of the algae blooms on the Antarctic Peninsula coast. The study reports that over 1,600 algal blooms were spotted on the snow surface, especially near hotspots for marine birds and mammals. This is because these animals strongly contribute to the growth of algae as their excrement serves as a fertilizer for growth. “Over 60% of blooms were found near penguin colonies, and others were found near birds’ nesting sites” (Woodyatt, CNN).

There may be a benefit to having a sudden growth of algae in Antarctica’s snow. “The algal blooms in Antarctica are equivalent to about the amount of carbon that’s being omitted by 875,000 average UK petrol car journeys,” Davey said. However, this number pales in comparison to the global carbon budget, with the algae not making a significant enough dent to be considered useful in reducing CO2.

Climate change will play a key role in the inevitable “greening” of Antarctic snow. “As Antarctica warms, we predict the overall mass of snow algae will increase, as the spread to higher ground will significantly outweigh the loss of small island patches of algae,” said University of Cambridge plant scientist Andrew Gray, lead author of the paper. Scientists are additionally investigating red and orange algae, which are also erupting in small blooms not currently visible from space. Who knows? Antarctica might have snow in all colors of the rainbow soon.