Project Drawdown, a climate change mitigation research group, has found that although utilizing solutions that meet the Paris climate targets could have negative short-term effects, they would prove beneficial in the long-term. The group’s 2020 review estimates costs and profits for different agricultural solutions. Based on their research, they have produced one important conclusion: though the upfront cost of $25 trillion of these solutions is notable, the result would be five to six times larger.

The research group evaluates climate solutions that could cause greenhouse gas levels in the atmosphere to decline, called carbon “drawdown.” Their latest review credits two possible outlines. The first is for climate solutions to meet the Paris climate target of being less than 2 °C hotter than pre-industrial temperatures. Based on this outline, carbon drawdown could be achieved in the 2060s. However, the second outline is significantly more aspiring. Instead of 2 °C more, it targets a temperature of 1.5 °C higher than pre-industrial temperatures. This would allow for the goal of carbon drawdown to be achieved in the 2040s.

The main difference between the two outlines is the rate at which wind and solar energy are employed around the world. The second outline estimates 12 percent more use of wind and solar energy globally than the first outline, stressing the positive effects of aggressive action in the fight against climate change.

Project Drawdown estimates that total savings would come out to $145 trillion using the first outline, and this doesn’t factor in the substantial savings that would follow from improving public health. The reason for such a significant number in the long-term is the savings that come from maintaining alternatives such as wind and solar. Lazard’s annual LCOE (Levelized Cost of Energy) reports that these alternatives have seen a decrease of 88% and 69% in costs since 2009, respectively. On the other hand, the LCOE reports that coal and nuclear energy have seen a 9% decrease and a 23% increase in costs, respectively. This further emphasizes the potential savings that could come as a result of aggressive action and utilizing renewable energy sources rather than fossil fuels.

The Bangladeshi government, in partnership with World Bank Energy, other developmental agencies and the private sector, are providing clean and reusable energy to rural Bangladesh in lieu of where traditional powerlines cannot reach. The organization aims to provide reusable energy in the form of solar power to the capacity of 4 million households, of which house 20 million Bangladeshi citizens. In a region that is largely developing due to lack of resources, the organization stepped in to provide the greatest resource to help the largely farming and manual labor community– now, the majority of their labor is automated and clean, thanks to the use of irrigation pumps that 6,000 farmers can now claim ownership of.

World Bank Energy is a subsidiary of the World Bank group, whose mission claims that “Access to energy is essential to reduce poverty.” The company achieves their mission by providing clean and sustainable forms of energy to areas that don’t have energy in largely developing countries. What’s significant is that Bangladesh, with the organization’s support, is not only bringing electricity to their people, but they are achieving it sustainably, by means of solar power, giving a positive push towards lowering their carbon footprint.

Bangladesh has long been a developing country that is recently achieving prominence. Classified as a middle-class economy with a population of 128 million, it is surprising to find that 25% of rural Bangladesh do not have access to a sustainable power source. However, their outlook for the next 10 years is very lucrative. By 2030, Bangladesh wants to have reduced greenhouse gas emissions by 20%, and produce over 30 GW of energy by solar power. They follow in line with several other countries like India and Great Britain in the hunt for a zero-emission country, a prospective outcome to solve the climate change issues that face us today. 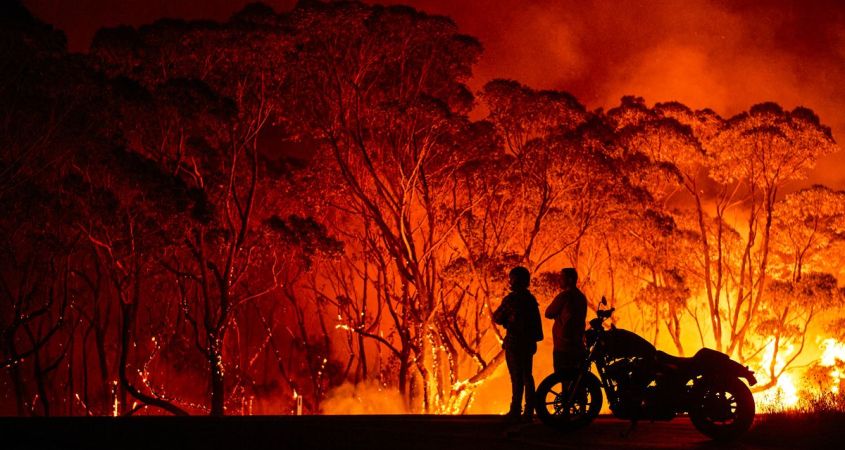 Since June of last year Australia has been in its “brushfire season,” but this year the impact of the season has been record breaking. The fires have burned over 46 million acres killing 29 people and over a billion wild animals. Some endangered native animals are suspected to be extinct after these fires. This brushfire season has also been the most destructive season on record destroying about 600 buildings, 2300 of which were homes. While wildfires are nothing new to Australia, the season’s effects were worsened by the heat and an extended drought during the season. The combination of the lack of water and high heat lead to the perfect recipe for a catastrophic outcome.

These fires are not only having huge impacts on the land of the country, but also the economy as the wildfires are estimated to have generated $3.5 billion dollars in damage (Source). This includes destroyed housing, buildings, and government infrastructure, like roads and schools. However, these are not the only damages that the Australian economy is facing. The fires in the country have also cost the tourism industry an estimated 4.5 billion dollars due to cancellations.

According to Peter Shelley of the Australian Tourism Export Council, the problem isn’t that people are having to cancel their stay at a lodge or resort because of the risk of fires, but it is the fact that when people cancel their stay at said lodge, instead of choosing a different one, they cancel their entire vacation. Shelley also added that many people would cancel even if the areas that they were staying were not threatened by fire or smoke. The Australian Tourism Industry is calling on its government to help fund an advertising campaign to help bring people back into the country. Shelley told the Financial Review that, It’s a very sensitive time and has to be handled right, but we need to push the message that Australia is welcoming tourists.”

All of these economic problems caused by the fires circle back to one thing: Climate Change. As the effects of global warming continue to strengthen we may see more of these problems in our future, and these brushfires serve as a warning as what may be coming in the future. It is up to everyone, from all parts of the world to help solve this crisis, as it is only a matter of time before something worse takes place.

While many electric vehicle drivers are not welcoming the addition of these fees, more than half of US states have some form of fees for electric drivers implemented. Most states choose a set fee every year that is paid when renewing the registration of the hybrid or electric vehicle. However, other states like Utah and Oregon have different options that, if drivers choose, will charge them a set fee for every mile driven in their electric car in the year, capping off at the car’s registration fee.

These instituted fees will pay for the lost tax revenue that the state normally receives through taxes on gasoline and diesel and will go towards the development of state infrastructure. Before the implementation of registration fees, or fees for using the states’ roads, electric car drivers were not contributing to the total cost of the upkeep of our country’s roads. According to Ryan Glon, “the driver of a sedan that returns 25 mpg pays $301 in taxes annually, and a $187 chunk goes to the state. The driver of a 50-mpg plug-in hybrid contributes $150 to the budget, which reduces the state’s share to $93, while those who commute in an electric car, absent taxes, pay precisely $0.” The current fees in place have drivers paying anywhere from $50 to $200 dollars per year, depending on the state and plan that the driver chooses (Source).

These fees hint at a larger problem that seems to be looming with the soaring popularity of electric vehicles. Fees like this show how our government cannot maintain offering benefits for owners of green technology. Similar things can be seen in the cuts to the tax benefits electric car owners used to receive due to the large increase in hybrid and electric vehicles. While charges like these are necessary to allow the government to pay for the preservation of state and national infrastructure, it draws from the incentive to buy an electric vehicle, and in the long run may hurt our world in its battle against climate change.